Ceylon tea has a distinctive taste and it has qualities unique to itself, likewise the tea produced in each region in Sri Lanka has its unique characteristics, the taste and quality of tea differs from region to region. This is the result of the different climates and elevations present in the regions.

Tea grown in this region comes from Nuwara Eliya and Kandy. In Nuwara Eliya tea is grown at an elevation of 6,200ft above sea level and has rare and refined qualities that differs from the low-grown teas. As a result of the higher altitudes and low-temperatures, Nuwara Eliya produces slow-grown bushes with rather small leaves which takes on an orange hue after withering. The infused tea leaves take on a greenish-yellow and has a pale liquor compared to other Ceylon Teas. 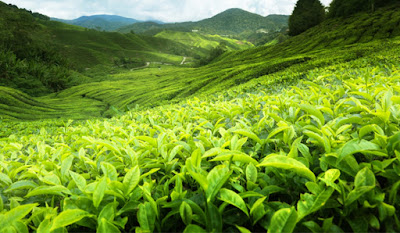 Kandy is famous for mid-grown teas and is also responsible for producing flavorsome teas. Kandy produces a variety of strengths and styles, and it all depends on the elevation of which the tea is grown at, tea grown at a lower elevation produces a rather large leaf and has a strong flavor when infused and tea grown at a higher elevation produces a smaller leaf and has a mild and delicate flavor to it. The best tea is produced in the first quarter of the year when the cool and dry weather sets in. Teas hailing from Kandy produce bright infusions with coppery tones, and also has fair amounts of strength and body.

The tea grown in the Uva region has a distinctive flavor and are mainly used in blends. The tea is grown at an elevation of 3,000 to 5,000 ft. Tea produced in this region comes from estates in Bandarawela, Badulla and Haputale. Uva teas are also known for its recognition around the world. They produce a leaf that is more blackened by withering than that of any other region and has a wide variety of ranges and the unique weather conditions contribute to the distinctive flavors and aromas that makes tea from Uva famous among tea lovers around the world. Uva region is also responsible for producing a significant amount of green tea.

Best known as low-grown teas, the tea estates of this region lies within an elevation of 2000ft above sea level. The soil and the low elevation of the region contributes to the rapid growth of the tea bush and produces a long beautiful leaf that turns intensely black on withering and is ideal for ‘rolling’. As the weather conditions are particularly warm and dry they produce a burgundy hued liquor in the cup. The teas grown in this region has a strong malty flavor, and the aromas have distinctive qualities to it, and is mainly consumed as black tea.

Tea grown in this region has a little variation to it than of the teas grown in southern district, this is a result of the wider range of altitude at which it is grown and the varied climatic conditions. They too produce a fast-growing bush with long leaves that are rather black when withered and very well suited for rolling. The liquor too is similar to that of the teas from southern district, a dark-yellow brown with a hint of red and during the dry season a little bit lighter in shade. The aroma though is completely different with a hint of sweet caramel and not quite as strong as southern teas and the flavor of the teas are somewhat stronger.

Each tea grown in each region contributes to the quality and distinctive flavors of Ceylon Tea that is famous all around the world among tea lovers.